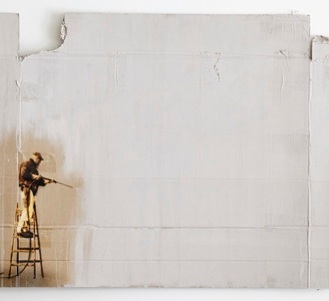 ‘Phoenix’ by Kaff.eine, in collaboration with artists Geloy Concepcion and Geric Cruz was an incredibly powerful and emotive exhibition, the result of their experience and involvement with the people of the impoverished slums of Baseco Compound and Aroma, Happyland in Manila.  The exhibition included collaborative paintings/drawings made by the residents and Kaff-eine, using charcoal made in Baseco, compressed charcoal and watercolour, limited edition photographs by Geloy Concepcion and Geric Cruz, and the global launch of the Phoenix mini-documentary, by Geloy, Geric and Marti Salva.

‘Kunst’ by Kirpy  is the first solo exhibition in Melbourne from this stencil artist since he has spent the past 12 months living and painting in Berlin, drawing inspiration from a city rich in both character and history. Whilst Kirpy has been abroad he has worked tirelessly plying his craft and experimenting with new techniques to further evolve his skills, continuing to impress with his unique blend of mediums culminating into an honest and detailed portrait of urban life. Whether it be images of streetscapes and architecture or of strangers walking by, Kirpy manages to perfectly capture the very essence of his subject through intricate detail on a wide array of canvases. Kirpy is pushing the boundaries of what we know and expect from stencil art by producing photorealistic pieces that challenge the audience into understanding the methods behind its production.
An all new body of work, ‘Kunst’ is an authentic and truthful depiction of the city of Berlin and the impression it has left on the artist. The exhibition captures the unique aesthetics of a city so rich in history, with a strong reference to the massive cultural revolution that occurred in Berlin in the early 1990’s after the fall of the Berlin Wall.