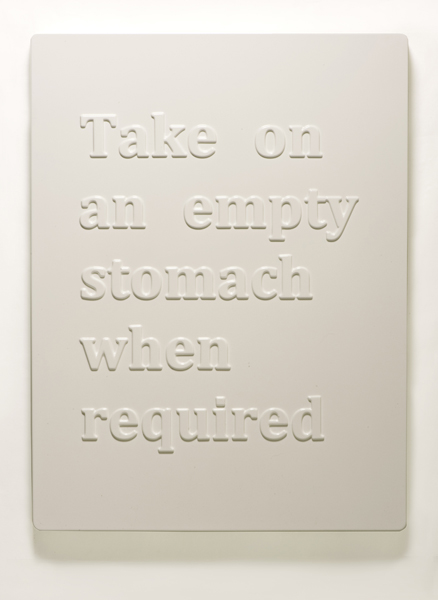 Cathyann Coady’s ‘pill’ sculptures exist on the precipice between fact and fiction, reality and illusion, well-being and ill-health. The sophistication in their conception and their technical accuracy allows us to immediately notice what might have been previously ignored. Despite the common presence of pills in our lives to quickly arrest all sorts of pains and disorders, the subtle elegance of their design may have inadvertently escaped us. Until now.  Here we have the most ordinary of throwaway objects being cleverly and emphatically inverted in terms of its value and artistic status.

To complicate matters, the topic of private medication is one which appears to be one of the final taboos of robust discussion. Religion, politics and sex have long lost their heat in most people’s households, dinner parties, and even workplaces. Perhaps it is because of the association that pills have with addiction and an inexorable strive for perfection that discussions of personal medication remain silent. Yet these artworks are as non-judgmental and objective as the pills themselves, populating our world as a result of unprecedented years of medical advancement.

Pills only gain their life upon application. The actual capsules of medicine, on which these sculptures are obviously based, have the capacity to offer swift feelings of well-being, with the attendant allure of becoming addicted to the substance which promises the delivery of peace. The pressures that they may relieve are subtly reflected in Coady’s works by the inclusion of wrinkled remainders. It’s not all black and white (2011) is an example of this.

The proportions of Coady’s sculptures replicate every detail of the mass-produced capsules in supermarkets and pharmacies which have become part and parcel of maintaining the equilibrium of contemporary existence or disrupting it deliberately to accelerate a certain mood. The vibrant work Saturday Night Fever (2011) hints at the latter. Youth 200mg (2012) is a reminder of the need to consider normal human degrees of physical tolerance, without ever introducing a puritanical edge.

Doctors and medical specialists, perhaps predictably, are among the keenest collectors of Coady’s pill works. For Coady to view aspects of the health profession as a worthy and highly inventive subject for art-making is refreshing and it has sound art-historical roots.  Leonardo daVinci investigated medical operations in ways that would now be viewed as unethical in his quest for anatomical discoveries. Rembrandt also painted scenes of operating tables.

But the art-historical precedents which are most pertinent to Coady’s contributions are more recent, and these comparisons only serve to place Coady in highly regarded company. For example, Damien Hirst’s preoccupation with mortality led him to construct pharmaceutical glass cabinets complete with actual packets of modern medicines, often anti-psychotic drugs and mood enhancers like Prozac.  He also created a range of screenprints which enlarged the packaging of pills, with the obvious intention of heightening our attention on the subtle authority of certain typography. But Hirst never took the step that Coady has with this body of work, and in that sense, it can be regarded as somewhat indebted to others, yet still highly original and stretching beyond where contemporary artistic peers have previously ventured.

The sculptures of Claus Oldenberg present another relevant forebear. As a revered pop artist emerging in the 1960’s, Oldenberg created sculptures which amplified the most mundane of commercial objects, from clothes pegs to safety pins sometimes as five metre metal sculptures in public arenas. Like Coady’s pill packets, once viewed, it is no longer possible to view the original object in quite the same way again. Likewise, it becomes no longer possible to ignore the simple beauty and the complex industrial decisions associated with the design of such objects.

As well as stemming from a pop art tradition, Coady’s wall-mounted pill-packet sculptures also harbour elements of the most restrained and minimalist sculpture. They would arguably hold their own among some of the world’s best practitioners, such as Donald Judd and John McCracken, and would not be out of place in a prestigious art fair or Biennale. Minimalist sculptors emphasised, as Coady does, the distilled essence of their subjects, and expressed a desire to eliminate any non-essential ornamentation. The  objective was to create an object whose design was enhanced the more it was reduced to its essential elements. Such pursuits may sound unduly esoteric or restrictive, until we acknowledge that they have since been played out by contemporary architects and much of the architecture we now inhabit, in public and private spaces, have their origins in these concepts. Coady’s current sculptures both reflect and complement minimal design.

It is safe to assert then that Coady is blending minimalist sculptural notions with a pop art tradition which has not lost any of its interest or steam since the 1960’s. Pop art persists and will continue to, as long as it talks back to the culture which spawned its imagery, but it will also take detours down minimalist or other paths as society changes.

Marilyn Monroe was undoubtedly a screen pop idol. Andy Warhol did not need to arrive to cement her fame as such, but he certainly capitalised upon her celebrity. Coady was also fixated with painting images of Marilyn Monroe for a brief period, and remains unwavering in her affection for Monroe’s star quality. As Coady is the daughter of a famous Australian model, and a former professional model in her own right, the artist was initially drawn to notions of feminine perfection.

In an ironic twist of pop-art fate, the paintings that Coady made several years back of her glamorous mother, Annie in her modelling days, were featured repeatedly in a television series The Block. As such, these paintings suddenly gained a vast mainstream and largely non-specialised art audience, the scope of which marketers engaged in product placement or curators wishing to introduce contemporary art to broader audiences could only dream of.

That was some years ago. The new sculptural pill pieces represent an artistic leap of faith in a new direction, three dimensional as opposed to two. But the two bodies of work are not polar opposites. Indeed, the artist asserts that there are strong narrative linkages between different bodies of work, in particular her series on Marilyn Monroe and the present pill sculptures. Certainly, ready associations can be made between Monroe and her premature and tragic death from an overdose.

That aside, the strength of Coady’s current work lies in its lack of didacticism and its subtle understatement. These qualities, in turn, lend the works a potential for ambiguity of meaning and inclusion of an audience who may bring different personal interpretations to the works. The wall-hung segments of pill packets, both intact and perforated, do not seek to hector us into accepting some narrow point of view about some social or psychological situation, like the most boring and condescending of political art currently in circulation. A recent Director of the Sydney Biennale summarised the importance of this point neatly (a point which sadly seems so infrequently grasped by other institutional appointees): Art should only pose questions. It should not answer questions. It is propaganda that presents straightforward and simple answers.

The questions which Coady’s sculptures pose appear to hold the ability to continue to unfold in both humorous and serious modulations. From a basic template could spring quite infinite possibilities and variations on the theme. Some pills are colour-coded. Others contain introduced substances like small plastic farm animals (Farmaceutical, 2011). It seems that every feasible malady, obsession, fear, insecurity, phobia, rattle of nerves, search for temporary elation, ache, or relief of a real or imaginary pressure could have an equivalent packet of capsules created on commission by this artist, a one-man-band artist-pharmacist.

If Coady maintains her discipline with her expansion of such bodies of work, the future diagnosis seems very healthy at this stage.

Cathyann Coady will be exhibiting on Stand S10 at Art Melbourne 2012
Where: Carlton Exhibition Building
When: 24 – 27 May 2012
To purchase art fair tickets online:    http://affordableartfair.com.au/Tickets

To advertise your gallery or exhibition email CANVAS & CO:  info@canvasandco.com.au