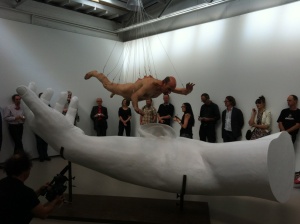 The Murmur of Skin:  by Darren Tofts

The human condition, the novelist Alain Robbe-Grillet once wrote, is to be there. Thinking in particular of the isolated characters of Samuel Becketts plays, the notion of presence on the stage exceeded the fictional drama of play, of acting. Like Shakespeares bare forked animal, the human body is vulnerable, alone, subject to a relentless flow of time and entropy beyond its control. Imagine, then, being hoisted four stories above a New York street, the bodys physical mobility compromised by an unforgiving system of hooks, wires and pulleys. Naked and silent, it too is there, anaesthetised and pacified, words carefully chosen by the artist to suggest suspension as an alternative state of being and of becoming. There in the 1985 Copenhagen City Suspension was sixty metres above the ground. Stelarc remembers how frightening the experience was, but at the same time the sensation of the body vibrating, simply occupying space.

The dispassionate reference to the body here bristles with the artists dogged resistance to the use of any variation of the first person pronoun when referring to himself in performance. While objectified the suspended body is also liberated, free of the earth-bound tyranny of the Second Law of Thermodynamics, beyond the material necessity of movement through the work of its own locomotion. Achieving a temporary escape velocity it is already on the way to becoming something else, a virtual body capable of flow across networks without the need for wires and hooks. This emergence of the telematic body is implicit in the suspensions. Consider the artists closing remarks to the notes for the 1980 Pull Out/Pull Up: Event for Self-Suspension in Tokyo: The skin is pulled out/the body is pulled up. Touch-down occurred after Approx. 20 minutes.

Stelarc performed twenty-five suspensions between 1978 and 1988. The very notion of suspension carries with it varying inflections to do with a state of abeyance, of something on hold in the physical and metaphysical sense. He frequently used the word event to describe such performances, suggesting an interim, enframed time and space that punctuates the diurnal flow of the everyday (suspensions typically lasted from sixty seconds to twenty minutes). The suspensions capture the moment when the body is no longer capable of agency. Conditional upon the infernal mechanics of the suspension apparatus (hooks, tension of wires, leverage of hoists) and the vagaries of atmospheric conditions, it performs involuntarily. Liberated or indeed denied the capacity to exercise will, the suspended body is no longer an active, reflexive subject in the Cartesian sense, but rather an involuntary zombie body subject to the will of other forces.

The suspensions commenced Stelarcs long-standing exploration of the obsolescence of the body, its material limitations as well as its contestable futures. The last suspension he performed in 1988, featuring the prosthetic Third Hand, was a fitting metaphor of the convergence of the somatic body and cybernetic technology into an informatic hybrid. But even here, and although obsolete, the body is not yet extinct but rather in suspense, waiting for whatever augmentations are required to extend it into the next phase of its evolution. The spectacle of the body in states of stress captures the fine, ambiguous line between cruelty and aesthetics, an idea that was central to the work of Antonin Artaud, an artist with whom Stelarc shares many affinities. Both the suspensions and the theatre of cruelty presume the abandonment of traditional conceptions of performance space and a more visceral communication between spectator and spectacle. And in particular the spectacle of the human body in transformation. As Artaud famously and somewhat presciently wrote in the First Manifesto on the theatre of cruelty, it is through the skin that metaphysics must be made to re-enter our minds.

This state of abeyance reveals how unreliable and inadequate the body is as a piece of equipment for living. Polemically, the suspensions insinuate genetics as bad code, planned obsolescence that must be enhanced and fortified to make the body more efficient under extreme conditions. Scientists Manfred Clynes and Nathan Kline were forced to invent the term cyborg in 1960 to describe the speculative notion of a technologically extended conception of the human body capable of self-regulation in outer space. In Stelarcs work the Renaissance perfection of Leonardos Vitruvian Man is also found terribly wanting in the age of the nano-scale, organ printing, cryogenics and partial life. But this is no morbid hatred of the body, but rather an anticipatory consciousness imagining its techno-biotic evolution.

Stelarcs interest in the human skin as an artistic medium begins with the suspensions and continues with his current Ear on Arm project. SUSPENSIONS converges these sites as material landscapes of exploration, in which the physicality of both is exposed and amplified. The ear on arm is suggestive of the skins capacity for fluency and superfluity, malleability and excess. As well it captures its ability to stretch and adapt to force, pressure and unusual, even abnormal growth. A recent performance at the Lorne Sculpture 2011 biennial displayed the body as it is and what it might become. The artist lies supine on a four-metre replica of the ear on arm sculpture. Disembodied, displaced on a beach, it resembles some weird detritus washed up overnight; a strange visitation anticipated in the 1981 Seaside Suspension: Event for Wind and Waves in Jogashima, Japan. It is a figure literally and metaphorically writ large, a play of scale between a human body and a huge fragment of a body, whereby the artists arm is equivalent in size to a finger on its Leviathan avatar.

Stelarc has lyrically described an acute aural sensation associated with the Copenhagen suspension as the whooshing of the wind, the whirring of the crane motors and the creaking of the skin (body tensions that were amplified as a further extension of the bodys central nervous system during the 1982 Moving/Modifying: Suspension for Obsolete Body event in Los Angeles). Think of the artist, then, suspended by wires and hooks, spinning above the distended ear on arm sculpture, listening to the murmur of its skin.

The suspensions are experiments in bodily sensation, expressed in different spaces and in diverse situations. They are not actions for interpretation, nor require any explanation. They are not meant to generate any meaning. Rather they are sites of indifference and states of erasure. The body is empty, absent to its own agency and obsolete.

To advertise your gallery or exhibition email CANVAS & CO:  info@canvasandco.com.au